In 1983 I graduated from a 2 year course in photography.  We learned everything, from beginning to end about photography, as well as its origin.  At the time, many of us students thought it was "dumb" to learn this...why did we need to know this?

A few years later, I was traveling Pennsylvania as a photographer at JCPenneys stores throughout the state.  To pass time I would go to antique stores and it was then that I started collecting old images and cameras.  I was fun to see the different clothing and styles from the early days.  I even purchased a book about the history of photography (not as dry reading as the text books.)

So why am I telling you this?  Because I thought that it would be interesting to share a little bit of history, so you can see how far photography has come. 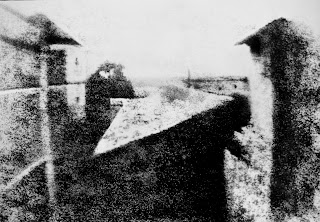 The first permanent photograph (later accidentally destroyed) was an image produced in 1822 by the French inventor Joseph Nicéphore Niépce. His photographs were produced on a polished pewter plate covered with a petroleum derivative called bitumen of Judea. View from the Window at Le Gras (La cour du domaine du Gras) was the first successful permanent photograph, created by Nicéphore Niépce in 1826 at Saint-Loup-de-Varennes. Niépce captured the photo with a camera obscura focused onto a sheet of 20 × 25 cm oil-treated bitumen. As a result of the 8-hour exposure, sunlight illuminates the buildings on both sides (information obtained from: http://www.alebady.com/2010/05/most-ancient-historical-photographs/ )

Kari L. Barchenger
Fargo, ND, United States
Memories Forever Photography was established in 1997. I started out as a Wedding Photographer and gradually expanded to other forms of portraiture: Childrens, Family, Seniors, and Business. I recently add a new category, Cars, as in Classic, Antique & your "Dream" car. Most of my sitting are done at my studio, but location sittings are also offered.